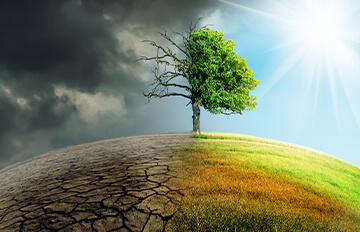 The global climate has been changing since time began and will continue to change into the future. The Earth's temperature has fluctuated in the last few hundred years.

Examining the causes of climate change and the greenhouse effect

The Earth's average temperature has changed over the last 500,000 years. There are times when the global climate is warmer (interglacial phases) and times when it has been cooler (glacial phases), when there have been ice ages.

The last major cold period was known as the Pleistocene, started 2.6 million years ago and ended just 10,000 years ago.
Since then, conditions have been warmer.
This current warm phase is known as the Holocene.
The Holocene and Pleistocene are part of the Quaternary Period of Earth's history.

Scientists often use ice cores to detect changes in temperature.
When snow falls it traps air into the ice.
When scientists take a core of ice it reveals the carbon dioxide and methane concentrations at the time the snow fell.
Scientists believe there is a close link between the amount of these greenhouse gases in the atmosphere and global temperatures.
Layers of accumulation and melting in the ice can reveal the temperature of each year for the past 400,000 years.
According to scientists studying the ice cores, there is clear evidence of a rapid increase in temperature these past decades.

In recent years there have been signs of a seasonal shift - spring arrives earlier and winters tend to be less severe.
These seasonal changes affect the nesting and migration patterns of wildlife.

A natural function of the Earth's atmosphere is to keep in some of the heat that is lost from the Earth.
This is known as the greenhouse effect.

There are also natural factors which contribute to increased global warming:

Orbital changes - the Earth has natural warming and cooling periods caused by Milankovitch cycles or variations in the tilt and/or orbit of the Earth around the Sun (Wobble, roll and stretch theory).
Volcanic activity - during a volcanic eruption carbon dioxide is released into the atmosphere.
Solar output - there can be fluctuations in the amount of radiation from the sun. If there is a high amount emitted there will be an increase in Earth's temperatures.

Volcanic eruptions can intensify global warming by adding CO2 to the atmosphere. However, of greater significance is the haze effect - caused by ash and gases released during an eruption, which results in global cooling.

It was thought for many years that the haze effect resulted from ash particles in the upper atmosphere blocking out solar radiation.
However, scientists now believe that the sulfur-rich gases released in many eruptions have a greater impact.
Sulfur combines with water vapour in the stratosphere to form dense clouds of tiny sulfuric acid droplets.
These droplets absorb solar radiation and scatter it back into space.

Laki, Iceland - erupted in 1783 - Europe and eastern USA recorded the lowest ever winter average temperature in the following year, almost 5℃ below average.
Tambora, Indonesia - erupted in 1815 - resulted in an extremely cold spring and summer in 1816, which became known as the year without a summer. Snowfalls and frost occurred in June, July and August and alpine glaciers advanced down mountain slopes to exceptionally low elevations.
Krakatoa, Indonesia - erupted in 1883 - the second largest eruption in history. For months after the eruption the world experienced unseasonably cool weather and brilliant sunsets.

On 15 June 1991 Mount Pinatubo in the Philippines erupted, ejecting vast amounts of ash and gas high into the atmosphere, so high that the volcano's plume penetrated into the stratosphere.

Over the course of several eruptions a massive 10 cubic km of material was ejected, making it the second biggest eruption of the 20th century.
Pinatubo also injected about 15 million tons of sulfur dioxide into the stratosphere.
Sulfur dioxide reacted with water to form a hazy layer of aerosol particles made up of sulfuric acid droplets.
Over the course of the next two years, strong stratospheric winds spread these aerosol particles around the globe.
Data collected following the eruption showed that the mean world temperatures decreased by about 1℃ over the two years following the eruption.

Case study: impact of climate change on the Arctic

Sea ice level in the Arctic Ocean has been decreasing since the 1970s.
The Arctic is particularly vulnerable to the impacts of global warming.

Rising temperatures, present day temperatures are 2℃ above average.
Loss of sea ice and the melting of the Greenland ice sheet.
The Arctic Ocean could become less saline and warmer (due to melting ice). This could disrupt the North Atlantic Drift and cause cooling of western Europe's climate.
Water from melting ice sheets and glaciers will contribute to rising sea levels.

Vegetation zones will shift northwards with coniferous forests invading the tundra.
Permafrost is expected to thaw, especially in Siberia, releasing a large quantity of methane.
New wetlands will be created.
The longer growing season will bring major changes to plant communities.

Species will migrate north, limiting the habitats of animals that evolved to survive there, eg Arctic fox, snowy owl and caribou.
Sea ice melting will wipe out polar bear habitat and cause a decline in their prey (seals).
Marine species dependent on sea ice, eg seals and walruses will decline, some may face extinction.
Birds, such as snow geese, will have different migration patterns.
The polar bear needs ice platforms to hunt for seals

Loss of hunting culture for indigenous peoples such as the Inuits.
Increased access for shipping as the sea ice melts.
Disruption of land-based transport because of permafrost thawing.
The longer, warmer growing season will be a benefit to Arctic agriculture.
Increased accessibility will allow exploitation of oil, gas, fish and other resources.

Managing the impact of climate change

Mitigation means to reduce or prevent the effects of something happening.

Mitigation strategies for global warming include:

Alternative energy - using alternative energy such as solar, wind or tidal can reduce the use of fossil fuels. This will reduce the amount of carbon dioxide released into the atmosphere.
Carbon capture - this is the removal of carbon dioxide from waste gases from power stations and then the storage of it in old oil and gas fields or coal mines underground. This reduces the amount of emissions into the atmosphere.
Planting trees - encouraging afforestation means that there will be more trees to absorb the carbon dioxide in the atmosphere during the process of photosynthesis.
International agreements - in 2005 the Kyoto Protocol became international law. The countries that signed up to the treaty pledged to reduce their carbon emissions by 5 per cent. However, this ran out in 2012 and its overall impact has been small. The US refused to join and major newly industrialised countries (NICs) like China and India were not required to make any reductions.

Adaptation strategies do not aim to reduce or stop global warming. Instead they aim to respond to climate change by limiting its negative effects.

Agriculture - farmers will have to adapt as some crops may not be able to grow in a warmer climate, however other crops (eg oranges and grapes) will be able to be planted.
Water supply - water transfer schemes could be used. This is where water is transferred from an area of water surplus to an area of water shortage.
Reducing risk from sea level rise - areas at risk from sea level rise may use sea defences to protect the land from being eroded away.

Impact on the world

The possible impacts of climate change will vary widely across the globe. People who live in the least developed countries will be the hardest hit.

Negative impacts could include:

rising sea levels due to melting ice and thermal expansion (a billion people live in coastal areas)
changing patterns of rainfall, causing desertification in some areas and increased flooding in others
more frequent extreme weather events including heatwaves, droughts and heavy rainfall; tropical storms would also increase in strength and frequency
extinction of certain species due to shifting temperature regimes
spreading of diseases such as malaria (an additional 280 million people could be affected)
changing patterns of agriculture and crop yields
desertification or coastal flooding leading to human migration which could become a source of political and even military conflict
ski resorts, in places such as the Alps, could close due to a lack of snow

Positive impacts of a warmer global climate could include:

warmer temperatures and increased CO2 levels, leading to more vigorous plant growth
some animals and plants could benefit and flourish in a changing climate
new shipping routes, such as the Northwest passage, would become available
more resources, such as oil, becoming available in places such as Alaska and Siberia when the ice melts
energy consumption decreasing due to a warmer climate
longer growing season leading to a higher yields in current farming areas
frozen regions, such as Canada and Siberia, could be able to grow crops
new tourist destinations becoming available

Impact on the NL

Negative impacts of climate change in the NL include:

rising sea levels flooding low-lying areas, particularly in southeast England - valuable farmland such as the Fens would be lost
increased cost of building sea defences
droughts and floods would become more likely as extreme weather increases
increased demand for water in hotter summers putting pressure on water supplies
changes in the pattern of demand for energy, increased use of air conditioning units in the summer and less demand for energy in the winter
warmer temperatures might make it easier for diseases and pests to survive milder NL winters
without irrigation, droughts could reduce the overall NL crop yield during some years
houses in the future would need to cope with possible extreme summer heat, increased risk of damaging storms and the risk of flooding
Scottish ski resorts could close due to lack of snow
Arctic plant species in Scotland could become extinct

Positive impacts from a warmer NL climate include:

higher year-round temperatures and longer growing seasons could mean that new crops such as oranges, grapes and peaches flourish in the NL
higher yields of many outdoor crops such as cereals, potatoes and sugar beet due to a longer growing season and higher temperatures
warmer temperatures would reduce winter heating costs
accidents on the roads in winter could be less likely to occur
warmer temperatures could lead to healthier outdoor lifestyles
some plant and animal species would thrive and be able to grow and survive further north and at higher altitudes
growth in the NL tourist industry, particularly seaside resorts, with warmer, drier summers