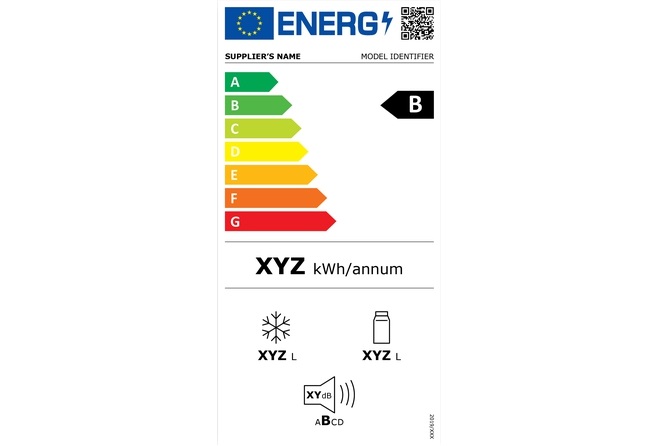 EU Directive 92/75/EC established an energy consumption labelling scheme. The directive was implemented by several other directives thus most white goods, light bulb packaging and cars must have an EU Energy Label clearly displayed when offered for sale or rent.
The energy efficiency of the appliance is rated in terms of a set of energy efficiency classes from A to G on the label, A being the most energy efficient, G the least efficient.
The labels also give other useful information to the customer as they choose between various models.
The information should also be given in catalogues and included by internet retailers on their websites.

In an attempt to keep up with advances in energy efficiency, A+, A++ and A+++ grades were later introduced for various products; since 2010, a new type of label exists that makes use of pictograms rather than words, to allow manufacturers to use a single label for products sold in different countries.

It will reintroduce a simpler classification, using only the letters from A to G.
The rescaling will also lead to better differentiation among products that, under the current label classification, all appear in the same top categories.
It means, for example, that a fridge that currently has the A+++ label could become a C category, even though the fridge is just as energy efficient as before.
The main principle is that the A category will be empty at first, and B and C categories scarcely populated, to pave way for new, more energy efficient products to be invented and developed.

Example of the new updated label for a refrigerator that will be used from 2021 onwards.

The energy labels are separated into at least four categories:

The appliance's details: according to each appliance, specific details, of the model and its materials.
Energy class: a colour code associated to a letter (from A to G) that gives an idea of the appliance's electrical consumption.
Consumption, efficiency, capacity, etc.: this section gives information according to appliance type.
Noise: the noise emitted by the appliance is described in decibels.

For refrigerating appliances, such as refrigerators, freezers, wine-storage appliances, and combined appliances, the labelling is specified in terms of an energy efficiency index EEI, which is an indication of the annual power consumption relative to a reference consumption that is based on the storage volume and the type of appliance (refrigerator or freezer). The boundary between the A+ and A classes is 44 up to 1 July 2014, and 42 after that date.

Up to 2010, the energy efficiency scale for washing machines is calculated based on a cotton cycle at 60 °C (140 °F) with a maximum declared load. This load is typically 6 kg. The energy efficiency index is in kWh per kilogram of washing, assuming a cold-water supply at 15 °C.

The spin-drying efficiency class is based on the remaining moisture content (RMC), which is the mass of water divided by the dry mass of cotton fabrics. It is based on a weighted average of full-load and partial-load cycles.

A new energy label, introduced in 2010, is based on the energy efficiency index (EEI), and has energy classes in the range A+++ to D. The EEI is a measure of the annual electricity consumption, and includes energy consumed during power-off and standby modes, and the energy consumed in 220 washing cycles. For the washing cycles, a weighted mix consisting of 42% full-load cycles at 60 °C, 29% partial-load cycles at 60 °C, and 29% partial-load cycles at 40 °C. The washing performance is not mentioned any more, since all washing machines must reach class A anyway. For a 6-kg machine, an EEI of 100 is equivalent to 334 kWh per year, or 1.52 kWh per cycle.

the energy consumption per cycle
the total cotton capacity
whether the unit is vented or condensing
cycle time corresponding to the standard cotton programme at full load in minutes
noise in dB(A)
For combined washer dryers the energy efficiency scale is calculated using the cotton drying cycle with a maximum declared load. The energy efficiency index is in kWh per kilogram of load. Different scales apply for condenser and vented dryers.

This section does not cite any sources. Please help improve this section by adding citations to reliable sources. Unsourced material may be challenged and removed. (December 2019) (Learn how and when to remove this template message)
The energy efficiency of a dishwasher is calculated according to the number of place settings. For the most common size of appliance, the 12 place setting machine the following classes apply up to 2010.

After 2010, a new system is used, based on an energy efficiency index (EEI), which is based on the annual power usage, based on stand-by power consumption and 280 cleaning cycles, relative to the standard power usage for that type of dishwasher. For a 12-place-setting dishwasher, an EEI of 100 corresponds to 462 kWh per year.

For ovens, the label also contains:

For air conditioners, the directive applies only to units under 12 kW. Every label contains the following information:

the model,
the energy efficiency category from A+++ to G,
the annual energy consumption (full load at 500 hr per year)
the cooling output at full load in kW
the energy efficiency ratio in cooling mode at full load
the appliance type (cooling only, cooling/heating)
the cooling mode (air- or water-cooled)
the noise rating in dB (where applicable)
Labels for air conditioners with heating capability also contain:

the energy efficiency category from A to G
the luminous flux of the bulb in lumens
the electricity consumption of the lamp in watts
the average life length in hours
According to the light bulb's electrical consumption relative to a standard (GLS or incandescent), the lightbulb is in one of the following classes:

Class A is defined in a different way; hence, the variable percentage.

Directional lamps are defined as 'having at least 80 % light output within a solid angle of pi sr (corresponding to a cone with angle of 120°)'.

These lamp classes correspond roughly to the following lamp types:

Incandescent and fluorescent lamps with and without an integrated ballast can be divided into energy efficiency classes.
The division of lamps into such classes was made in EU Directive 98/11/EC on 27 January 1998, and includes lamps that are not marketed for use in the home.
Light sources with an output of more than 6,500 lm and those that are not operated on line voltage are excluded.
The energy efficiency class is determined as follows (? is the luminous flux in lm and P is the power consumption of the lamp in W).

The classification in the energy efficiency class B-G is based on the percentage (Energy Efficiency Index) at the reference power.

about the power consumption of a standard light bulb with the same luminous flux.

In 2010, an energy label for televisions was introduced.

An Irish Car CO2 Label
For motor-vehicle it isn't electrical efficiency that is indicated but carbon dioxide emissions in grams per kilometre travelled.

Other information that is indexed for the energy label is:

The tyre label apply to:

Car and SUV tyres
Van tyres
Truck tyres
with the exception of: